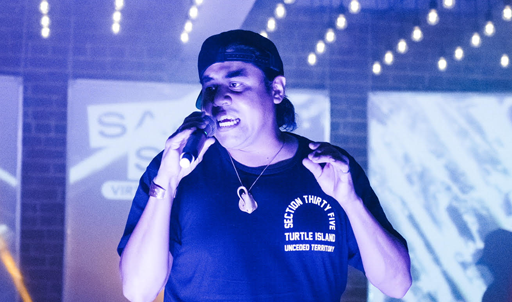 Hope (born Patrick Kelly, 1984) is a professional Hip-Hop artist and performer from Leq’a:mel First Nation British Columbia, and based in Vancouver BC. Inspired by Tradition, Hope uses the art of storytelling and rhyme to depict life on the reservation and illustrate to others what it is to be indigenous. Releasing his first album with Indigenous Hip Hop Duo “Status Krew” in 2011, Hope has been steadily contributing to the BC Underground Hip Hop scene as well as the Indigenous Hip Hop scene through EP, Album and Music Video releases ever since. In 2014 Hope along with his rhyme partner “Doobie” joined local artist Mamarudegyal MTHC in co-founding Indigenous Hip Hop and Multimedia group “Rudegang Entertainment” Winning a Fraser Valley Music award in 2017 (Best in Hip Hop – Male) sparked new motivation for Hope, who then embarked on a new project and the most important album of his career thus far, “Red Man”, released July 2019.